Ringworm, Athletes foot and Jock itch  and treatment in humans

Tinea (or ) is a fungal infection that can affect humans. The most common forms of tinea are called Ringworm, Athletes and Jock itch.

Tinea or ringworm is a usually mild skin infection with a fungus, so it is not caused by a worm (see picture at WebMD! (Citations 1, 2) The ringworm name comes from the ring-shaped red spots that develop on the skin.  Another medical term for tinea is which links directly to the cause: a dermatophyte. (Citation: 3)

Dermatophytes are a group of three sub-families of fungi: Trichophyton, and Microsporum. These fungi use the keratin in skin or nails of humans and animals to stay alive. The specific name after the word “tinea” is based on the location on the body.

How common is Tinea?

Tinea is common in most countries and occurs more frequently in areas with poor hygiene.  (Citation: 7) In a recent global burden of diseases study, fungal skin infections were the 4th most prevalent disease (Citation: 8), and dermatophytoses make up a significant portion of these. It is estimated that every 1 to 2 out of 10 persons will get a dermatophyte infection somewhere in life. (Citation: 9)

Is a Tinea infection contagious?

Tinea is contagious and is usually spread through direct contact with an infected person or animal (cat, dog, cattle, guinea-pig). It is also possible to get ringworm through contact with contaminated soil, contaminated surfaces (chairs, swimming pool floors etc.) or contaminated items (like toilet articles, clothing, chair, towel, bedclothes etc.). (Citation: 7) There are conditions and circumstances that increase the risk of getting tinea. They include impaired immunity, close contact with animals, use of public locker rooms and public showers, engagement in contact sports, warm and humid circumstances (tight shoes, hot/humid climates, excessive sweating) and poor hygiene. (Citation: 1)

What Are the Signs and Symptoms of Tinea?

The signs and symptoms vary a bit dependent on the area of the body that is infected. In general, there is itching and ring-shaped red areas that are scaling and/or cracked. In tinea of the scalp, beard etc. there might be hair loss.  (Citation: 10)

Ringworm of the scalp (tinea capitis):  Tinea capitis is most common in children of primary school age. This type of tinea can appear in many different forms. It often shows as several round spots of baldness, with or without inflammation. Especially non-inflamed areas might appear as “black dot ringworm”; the black dots are infected broken off hairs.  The “gray type” of tinea capitis has round bald spots with a lot of scales.  The “diffuse scale” type has a lot of scales all over the scalp, which might look a lot like dandruff. The ‘moth-eaten” type also has scales combined with patchy hair loss. More inflammation with often enlarged lymph nodes in the neck is seen in the “kerion” type and the “diffuse pustular pattern” type. The kerion refers to a localized swelling similar to an abscess while the diffuse pustular pattern relates to the extensive spread of pustules (pimples filled with pus). The last one is easily misdiagnosed as a bacterial infection, although there might also be a bacterial co-infection. In the “favus” type there are yellow crusts and matted hair. (Citations: 9, 11, 12, 13)

Athlete’s foot (tinea pedis): Tinea pedis usually affects the areas between the toes (the toe webs), particularly the between the 4th and 5th (little) toe. Commonly it shows a red cracked skin with flakes and itching. The skin might also become white and thicker with or without some swelling. When the infection spreads to the foot sole, this is called “moccasin athlete’s foot”. Athlete’s foot is related to warmth and sweating and occurs more often among people practicing certain sports (running, swimming) and in men and older people.  (Citation: 14)

Jock itch (tinea cruris): Jock itch is found at the medial part of the upper thigh, in the groin area. The penis and scrotum are usually not involved. This is rarely seen in children, and it affects more men than women. (Citation: 15)

Onychomycosis (ringworm of the nails or tinea unguium): Ringworm affects more often the toenails than the fingernails and is more common in (older) adults. It has a relation with poor diabetic control and poor circulation, but also with too tight shoes and use of public locker rooms and showers. Onychomycosis can affect the nail itself, the nailbed or both. The nails become white or yellow and lose their normal shape. (Citations: 9,16)

Ringworm of the body (Tinea corporis): This form of tinea is more common in children and adults who live in humid, hot climates. It can occur anywhere on the body except for scalp, nails, groins, feet, hands, face (including beard and mustache areas). Pink to red round spots visible that have raised and scaly borders. Often the spots develop a clearing in the center: this gives the classic “ringworm” outlook.  The spots do not always itch; sometimes there is a noticeably painful burning sensation. (Citations: 9,18,19) 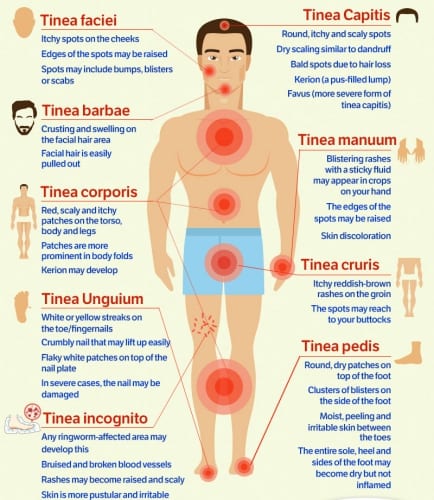 How to a Tinea infection in humans?

Tinea infections are often recognized by doctors on their appearance. They can also be diagnosed by microscope examination of or laboratory testing of skin samples or scrapings. A culture is also possible to determine the type of Tinea infection present. The old method of using a Wood’s lamp to detect fluorescence of fungi only works for a few Microsporum fungus types.  (Citations: 20, 21, 22, 23)

What Is the treatment for a Tinea infection?

The treatment for tinea usually consists of a topical application of a non-prescription antifungal cream, powder or lotion for 2-4 weeks, for example, Clotrimazole, Miconazole, Terbinafine or Ketoconazole. (Citation: 24) The most effective antifungal topical specifically for athlete’s foot is Terbinafine.  (Citation: 25)

Are there complications from Tinea infections in humans?

The most common problem with tinea infections is the spreading from one area to another, for example through scratching at different places of the body. In tinea capitis and tinea barbae, the complication is often hair loss and (patchy) baldness. Especially in people with broken skin and/or impaired immunity secondary bacterial infections might develop, but also in the pustular type of ringworm of the scalp. A rare problem is the development of scars, especially in the kerion type of tinea capitis.  (Citation: 28) A topical application to the scalp can, however, be used to prevent the spread of the tinea capitis; this can also be a shampoo. (Citation: 29)

What are preventive measures against Tinea?

The most important preventive measure for tinea is good hygiene: regular washing with soap and followed with proper drying and keeping dry of moist body areas such as groins. The infected areas should be dried last to prevent spreading the infection.  (Citations: 7, 30) This drying is also important after swimming, including drying between the toes. Wearing of bad slippers or sandals in public showers and swimming pools is also a good measure. One should also not share any personal items to prevent infection. If needed, items like brushes or combs can be cleaned with a bleach solution. Items like clothes, and bedding should be washed at temperatures above 60 degrees Celsius. If this temperature is not possible, then disinfectant detergents are to be added. (Citations: 14, 31, 32, 33)

Scratching should be avoided to prevent spreading the infection to other parts of the body. People with athlete’s foot should for example wash, treat (topical application) and clothe their feet before they put on underwear. Athlete’s foot can also be prevented through wearing shoes that let the feet breathe and are not too tight and alternating shoes so as not to wear the same pair every day. (Citation: 14)

Other prevention measures are the treatment of your pets that have ringworm and keeping your nails short and clean.  (Citation: 34)