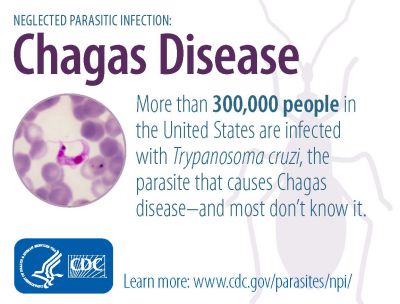 What Is Chagas disease?

The blood-sucking bug Triatomine plays a significant role in the Chagas lifecycle. This bug is a meaner and larger cousin of the bed bug.  The most common layman name reflects their tendency to bite especially in the face near the mouth: kissing bugs. Because they suck blood they are also called vampire bugs, and the bloodsucking is done with their cone-shaped nose, so they are also called bugs. (Citation: 4) If the Triatomine carries T. in their body and their feces comes inside the bite wound, they can transmit the T. to humans.

How common Is Chagas disease?

The world distribution of Chagas infections annually is shown here: 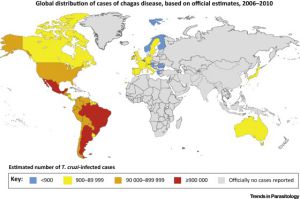 It is estimated that 8 million people are infected with T. and more than 10,000 people die every year because of Chagas disease. (Citation: 8). PAHO estimates that 65 million people in the Americas alone are at risk of contracting the disease (Citation: 9).

When we think about the contagiousness of Chagas, we need to keep the life cycle in mind.

The disease is mostly transmitted through contact with feces of the Triatomine that contains the parasite Trypanosoma . Since Triatomines like to live in bad houses, e.g. with mud walls and thatched roofs, this makes people who are or live in rural areas are more susceptible to infection. When a Triatomine bites you (often in the face), it sucks up blood and at the same time leaves feces behind. The bite wound itches, so you will scratch and thus put the feces into the wound. This way, if that feces contained T.  , you will now be infected with the Chagas disease. Because of the circulation T. in your blood – you can now yourself infect an (uninfected) Triatomine once it bites you.

There are other less common ways to get infected with disease. You can get infected by becoming the recipient of contaminated blood products, like from a blood transfusion, or organ transplant from an infected donor. Also, from mother to baby during birth or in a laboratory accident. Getting infected by consuming drinks or food contaminated with infected bug feces is rare. (Citation: 10).

We don’t need to worry yet about common bed bugs giving us Chagas disease – although theoretically, this could be possible. (Citations: 11, 12).

What are signs and symptoms of Chagas Disease?

Chagas disease has two phases: the acute phase and the chronic phase. In both phases, the diseased can range from no symptoms to life-threatening.

Most people get no or only light self-limiting symptoms in the first weeks or months: like a rash and swelling at the site of the bite, swollen eyelids, fatigue or fever (Citation: 13). This acute phase can be severe in people with impaired immunity and (rarely) in young children, for example through infection of the heart or brain. Even if the symptoms resolve the infection will persist unless it is treated. An untreated infection will progress to the chronic phase, which is further discussed under complications.

How to diagnose Chagas Disease in humans?

Chagas disease is diagnosed through examination of your blood under the microscope. In the so-called “thick and thin smear” the laboratory staff will be looking for the T. parasites. This method works well for the acute phase of the disease, but not for the chronic phase. In the chronic phase, the parasites have migrated from the blood to the organ tissues, so a test for antibodies against Chagas (called serology) is needed. (Citations: 14, 15)

If you test positive you will often have to undergo cardiac examinations like X-ray and electrocardiogram and ultrasound, and if you have intestinal complaints often also an intestinal assessment.

If you wonder if you need to be tested for Chagas disease please see a healthcare provider.

What is the treatment for Chagas Disease?

For the treatment of Chagas disease, there are two pharmaceutical drugs available: benznidazole and nifurtimox. (Citations: 16, 17, 18). Both drugs are contra-indicated in early pregnancy (first trimester). The FDA has recently approved Benznidazole for use in children 2- 12 years old in the USA (Citation: 19), Nifurtimox is not FDA approved. Both drugs are available through CDC. (Citation: 20).

What are complications from Chagas Disease in humans?

The main problems with Chagas Disease are deaths in young children (rare) and people with diminished immunity in the acute phase and the development of a chronic form of the disease. The chronic form can lead to heart problems (e.g. cardiac failure and even sudden death) and intestinal problems (enlargement of the esophagus and the colon – the lower portion of the large bowel). (Citations: 22, 23)

How to prevent getting infected with Chagas Disease?

Unfortunately, there is no vaccine yet against Chagas Disease. Several therapeutic and preventive vaccines are in development (Citations: 24, 25). Prevention takes into account the various ways of transmission and the life cycle (Citation: 26):

WHO plays a key role in global control of Chagas disease (Citation: 27)