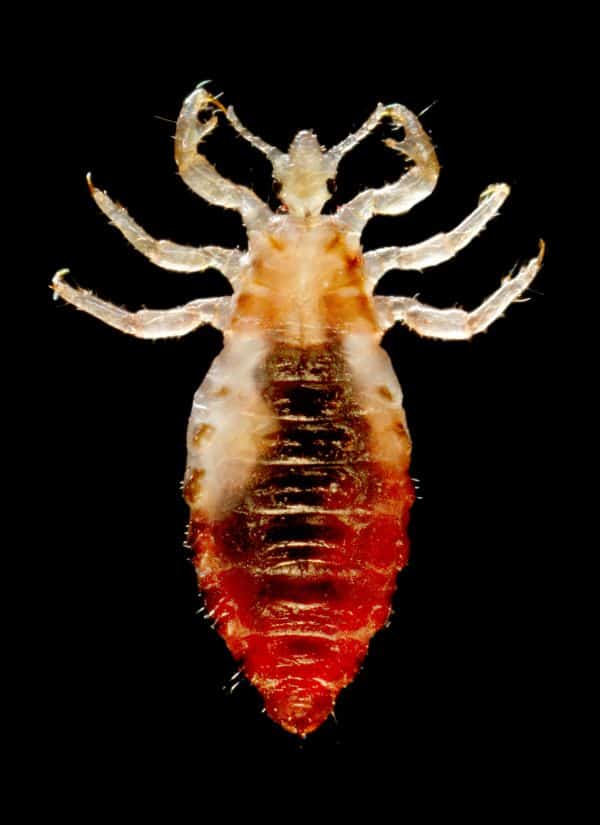 What is A Lice infestation?

Lice (singular: louse) are small parasitic insects that live on the outside of the body of warm-blooded hosts, mostly birds and mammals, including human beings. They feed on the blood of their host. There are primarily three types of lice that live on humans: the 2.1-3.3 mm long head louse (Pediculus humanus capitis), the 2.3-3.6 mm long body or clothes louse (Pediculus humanus corporis) and the 1.1-1.8 mm long pubic or crab louse (Phtirus pubis). The last one has a “crab-like” shape.  (Citation: 1) A Lice infestation is sometimes called Pediculosis, and the pubic lice infestations is commonly known as “crabs”. (Citation: 2)

How common are Lice infestations?

A recent analysis showed that head lice is widespread around the world, with prevalence rates ranging from 0.48% to 61.4% and with no differences based on socioeconomic or hygiene status. Younger people (pre-school through middle school) are at higher risk of head lice because of a higher chance of head-to-head contact (the primary way head lice are spread).  (Citations: 3, 4)

Body lice is also found around the world but is mostly found in crowded and poor hygiene conditions, for example during natural disasters, war and among refugees and homeless people.  (Citation: 5) There is no reliable information on the prevalence of body lice. Body lice can transmit several diseases, see further under complications.

Pubic lice are a common sexually transmitted disease in adolescents and adults. A 2014 article estimates the average global incidence to be 2%. The authors found a significant correlation between increasing pubic hair removal and decreasing incidence rate of pubic lice. (Citations: 2, 6, 7)

Is a Lice infestation contagious?

Transmission of body lice occurs by sharing contaminated bedding and clothing of an infected individual. This is because body lice live primarily on clothing and bedding, and not on people. That is also why some people prefer to call body lice “clothes lice”. (Citations: 2, 5) Until recently only the body louse has been known to cause disease, or specifically three diseases: louse-borne relapsing fever, epidemic louse-borne typhus and Bartonella quintana infection (or trench fever). (Citations: 9, 10) For example, a recent article shows that in Africa head lice also carries Bartonella quintana and so might potentially also transmit trench fever.  (Citation: 11)

Pubic lice are primarily transmitted through sexual contact. They can, occasionally, also be transmitted in close contact, e.g. between adults and children, and through contact with personal items including clothing, bedding and towels. (Citations: 2, 6)

The life cycles of the three types of human lice are similar, with three stages: eggs (nits), nymphs (immature lice) and adults. (Citations: 12, 13, 14) 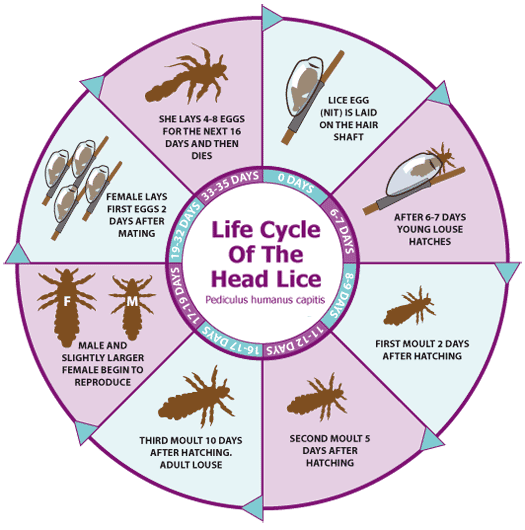 What are signs and symptoms of Lice infestations?

All types of lice give intense itching because of a natural allergic reaction to the louse bites that humans have; sometimes there is also rash. The bites themselves usually appear as small red bumps or dots. The itching can lead to scratching and subsequent scratch wounds, which can become infected with bacteria that normally live on the skin. (Citations: 2, 15, 16, 17) When lice move around the body, they can give a tickling feeling when they move hairs on the body. Adult lice (a bit bigger than a sesame seed) might be found moving about on the clothes, body or attached to hairs, while lice eggs (nits) can be found attached to hair shafts. The nits look like tiny buds of the pussy willow, but also resemble dandruff that can’t be easily removed from the hair. They have a grayish white color.  (Citations: 2, 18)

It can take 4-6 weeks before the itching become noticeable in an initial head lice infestation. Sleeplessness and irritability have been reported with head lice as well. (Citation: 15) The head lice can be found in the hair and on the scalp, but also in other hairy body areas.

Body lice are the only type of lice that are known to transmit disease, for details see the complications section below. Due to a long-lasting body lice infestation, skin areas with many bites might become thicker and darker, especially in the middle part of the body, this is called “vagabond’s disease”. (Citation: 16)

Pubic lice are usually found in pubic hair, but can also be found in other hairy areas like the beard, mustache, eyebrows, eyelashes, armpits, chest, back and thighs. (Citations: 2, 17) Pubic lice is considered as a sexually transmitted disease (STD). (Citation: 2)

Rarely sky-blue spots (maculae ceruleae) appear on trunk, buttocks or thighs due to the anticoagulants in body louse saliva. (Citations: 2, 19)

How to diagnose a Lice infestation in humans?

A magnifying glass can assist in the detection of eggs, nymphs and adults in all lice types. A Wood’s lamp or light might also assist in finding lice, especially the live eggs which present as live nits will fluorescence in the unique light.  (Citations: 2, 20)

Head lice infestations are diagnosed best by finding a live nymph or adult louse in the hair or on the scalp. Just finding nits, especially if they are more than ¼ inch from the base of the hair shaft, could also indicate an old, no longer active, infestation. Combing with a fine-toothed (teeth less than 0.2 mm apart) louse comb through wet hair might help to find the nymphs and adults. The best places to look for signs of lice are the back of the head and behind the ears. (Citations: 2, 21)

Body lice infestations are diagnosed through finding live nymph/adult lice and their eggs in the clothes of the person (where they primarily live) or, sometimes, on the body of the person. The best place to look for the lice is in/close to the seams of the clothes. (Citations: 2, 22)

Pubic lice infestation is diagnosed by finding crab lice or eggs on hairs in the pubic area or other areas of the body.  (Citations: 2, 23) 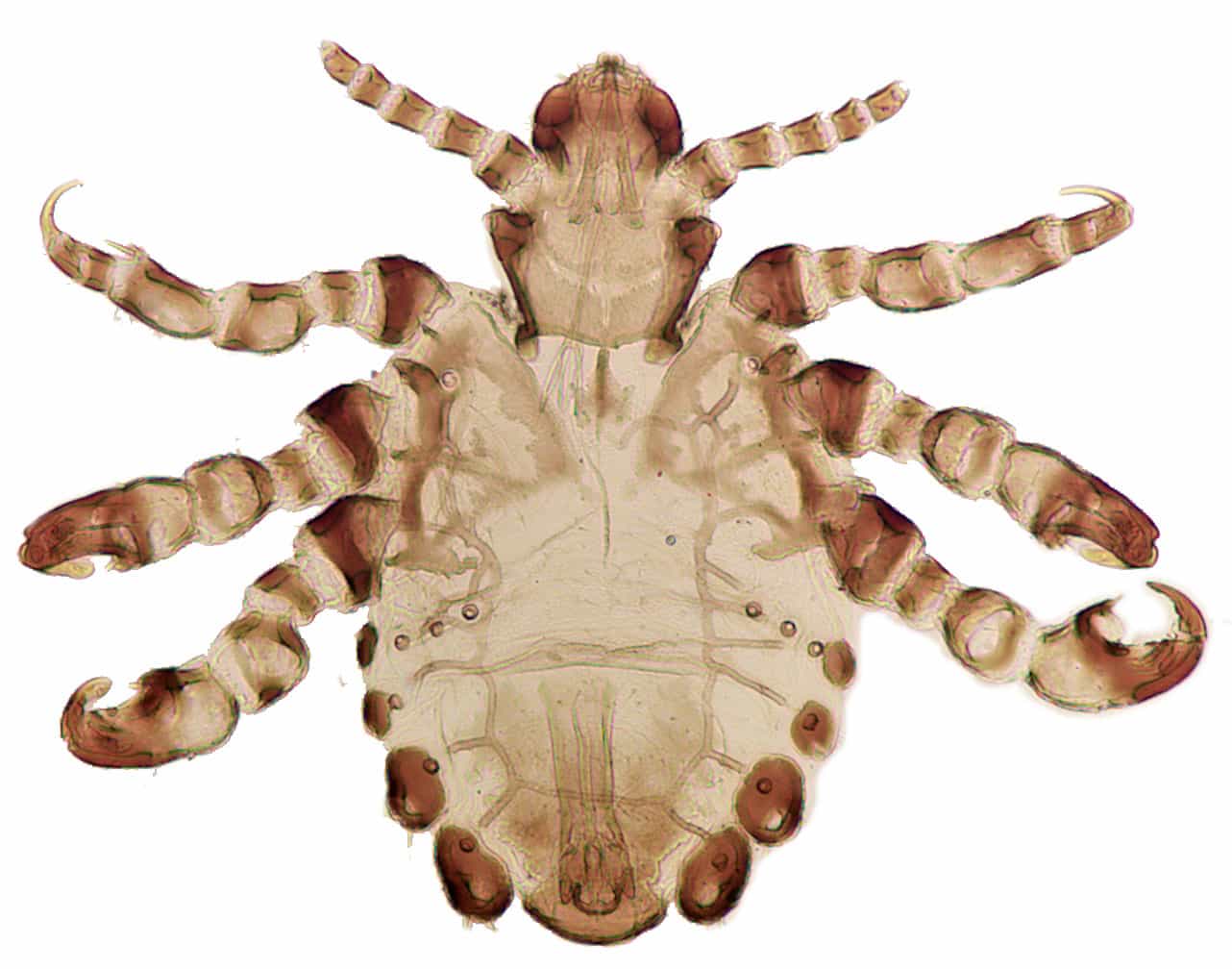 What is the treatment for a Lice infestation?

Treatment for head lice is usually with topical applications (like Dimethicone, Permethrin, Pyrethrin, Benzyl alcohol, Malathion and Lindane) to the scalp and the hair ensuring all household members and other close contacts including bedmates are treated at the same time. This is usually combined with wet combing with a louse comb in wet hair after the treatment application. Often retreatment, if needed, is done after 1-2 weeks. This is essential especially if the topical application is or was not able to kill all the eggs. Additionally, natural parasite cleansers include using white vinegar to dissolve nit glue before the treatment and hot cleaning/drying at temperatures above 53.5 degrees Celsius / 128.3 degrees Fahrenheit. Also using a plastic bag sealing technique for two weeks on personal items is recommended by many.  (Citations: 2, 24, 25, 26)

There is only symptomatic treatment for body lice infestations and the lice themselves primarily live on clothing and bedding. These items should be washed and dried at high temperatures, dry-cleaned, ironed or sealed in plastic bags for two weeks. The personal hygiene should also be improved to include regular cleaning of all clothing and bedding. (Citations: 2, 27, 28)

Pubic lice are treated with topical applications including Lindane shampoo, Pyrethrin/piperonyl butoxide shampoo or mousse and permethrin cream/lotion along with oral Ivermectin. (Citations: 2. 29, 30, 31) Preferably all sex partners are to be treated at the same time.

What are complications from Lice infestations?

For all types of lice infestations, a common complication is a secondary bacterial infection of the scratch wounds. (Citations: 15, 16, 17) Some patients might have locally enlarged and infected lymph nodes. (Citation: 2) Especially in heavy infestations of hairy areas, for example with head lice, there might be hair loss. (Citation: 32)

Louse-borne relapsing fever is a recurring fever disease with pain in the head, muscles and joints accompanied by nausea that is caused by Borrelia spirochetes. It is endemic in northeast Africa. (Citations: 33, 34)

Louse-borne epidemic typhus is a rare disease caused by Rickettsia prowazekii, which used to be common in extreme overcrowding conditions. The disease occurs worldwide.  (Citations: 35, 36)

Trench fever got its name in World War I. Bartonella quintana infection results in an acute, recurring febrile disease, with sometimes a rash and pain in the head or inside the bones.  (Citations: 37, 38)

If the pubic lice infestation involves the eyebrows and eyelashes, this can lead to eye infections and inflammations. (Citation: 31)

What are the preventive measures for Lice infestations?

Prevention of head lice infestations mainly includes avoiding hair-to-hair (also called head-to-head) contact. This can be supplemented by not sharing personal items like clothing and items that come into contact with hair like combs and pillows. (Citation: 39)

The primary prevention measure of body lice infestations is proper personal hygiene of at least once a week bathing and adequately laundering clothes. Bedding, clothing and towels should not be shared with other people. (Citation: 40)

Pubic lice infestation is prevented by avoiding sexual contact with infected persons. If you do come into contact with someone with pubic lice, then treatment of infested persons is essential, and not sharing bedding, clothing and towels. (Citation: 41)