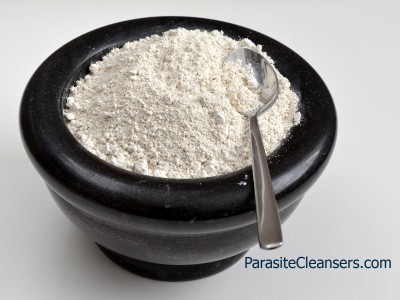 You have probably already heard of Diatomaceous earth. This widely used substance is found in everything from toothpaste to flour and as a filtration compound for swimming pools, beer, maple syrup, and medicines. It has many names like Ancient Treasure, Miracle Mineral, Dinosaur Dust and Fossil Shell. This is because of the wide variety of uses that it has. Diatomaceous earth is a natural source of silica which promotes healthy skin and supports heart health. But did you know that it is also a natural organic pesticide and an excellent internal cleanser?

A journey of 135 million years ends in your morning juice

Diatomaceous earth was first discovered in Germany by Peter Kasten in 1836 when he was trying to drill a water well. He originally believed he had discovered a layer of limestone and did not think much of it. He noticed the sediment he had removed from the ground and discarded on his property demonstrated the ability to protect his crops from insects. Soon this substance became a popular natural pesticide.

Diatomaceous earth is a naturally occurring siliceous sedimentary rock that is soft and easily crumbles into a powder like substance. The natural color is white to cream and it has a particle size normally between 10 and 200 micrometers. To the touch, diatomaceous earth feels abrasive like pumice powder. The normal chemical composition is about 85% silica, with small amounts of alumina from clay minerals and iron oxide. (citation: 1)

Diatomaceous earth forms via the accumulation of the amorphous silica remains of dead diatoms. Diatoms are microscopic single-celled organisms. They include a major group of algae and a very common type of phytoplankton found in the world’s oceans, lakes, and rivers dating back at least 135 million years. The word diatom originates from the Greek word meaning “to cut in half”. This is a reference to the two-part shape of their shells.

Diatom will secret a hard silica shell as protection against predators. As the diatom die their hard shell will remain. Over time these shells will accumulate on the bottom of the lakes or oceans where they reside. Every major deposit of diatomaceous earth is unique. The composition is made up of varying blends of a pure diatomaceous earth with a combination of minerals and naturally forming clay. Also, the silica content will vary by deposit based on the age of the formation.

The unique physical property of Diatomaceous earth is what makes it such a popular substance today. It is highly absorptive and has high porosity. This allows it to absorb its weight in water and still feel dry to the touch. The structure of the grain is ragged and uneven. This creates sharp edges at a microscopic level.

How does Diatomaceous earth kill parasites?

If you considering including Diatomaceous earth in your parasite cleanse, always look for “food grade” quality. This is a widely used substance that has industrial uses and not all diatomaceous earth has been properly processed for human consumption.

Due to its abrasive and absorbent properties, diatomaceous earth has a strong physical-mechanical insecticidal action, killing the insect by desiccation. (Citation: 2)

Its sharp characteristics make it an effective pest killer. The outer layer of all parasites is called epicuticle. The epicuticle is made up of three fine layers. The inner, lipoprotein layer called cuticulin. The middle fragile waxy layer that plays an important role in water retention and the outer Cement layer. All three of these layers together are vital in keeping moisture inside of the body of the parasite. The sharp irregular edges of the diatoms have been shown to cut through those layers of parasites. This causes tiny incisions in the parasite through which moisture can escape, and is absorbed by the honeycomb structure of the substance. Without the protective layer keeping moisture in, the parasite will dry out and die. This makes diatomaceous earth effective against a wide variety of parasites including bedbugs, mites, intestinal worms and their larvae.

Additionally, as it passes through the digestive tract, the diatomaceous earth particles have an electrical charge that attracts particles of the opposite electrical charge and traps them in its highly absorptive and porous structure so that they can be expelled safely. This gives it the added benefit of helping to eliminate pathogens such as bacteria, viruses, protozoa, and fungi.

Personally, I like to take about 2 tablespoons of Diatomaceous Earth a day. I add it to a small glass of water. Just enough water to make it drinkable and not powdery. For me, it is easier to swallow that way and I do not have to taste it. Then I will follow up with a full glass of water to wash it down. Some people like to add it to their juice or coffee, or even mix with a protein shake or smoothie.