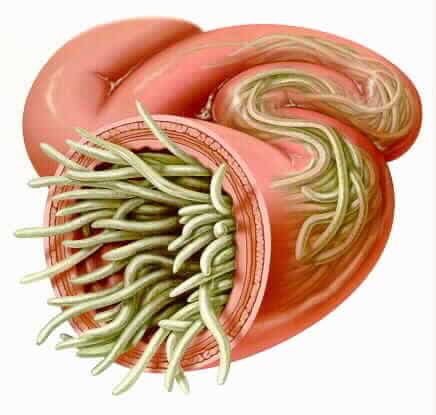 What is an Ascaris infection?

Ascaris infections are an infection of the parasitic roundworm Ascaris (Ascaris lumbricoides). The medical term for an Ascaris infection is Ascariasis.  (Citation: 1) Ascaris is one of the three main soil-transmitted helminths (worms) that affects millions of people every year, together with hookworm and whipworm.  (Citation: 2) Ascaris is the largest parasitic roundworm (nematode) that lives in the human intestines. The female worms are 20-35 centimeters; the male worms are 15-30 centimeters.

How common are Ascaris infections?

It is estimated that between 800 million and 1.3 billion people worldwide are infected with Ascaris lumbricoides. (Citation: 1) Ascariasis is the most common human helminth (parasitic worm) infection. (Citation: 3) Ascaris infections are common in warm and humid climates, especially where sanitation and hygiene are poor. The infections also occur in warmer months in temperate climates. (Citation: 7) Ascariasis is often thought to be uncommon in the developed world. However, a recent article described 14 recent human ascariasis cases in Maine (USA).  In the USA Hotez called Ascariasis a “neglected infection of poverty” for the regions of Appalachia, Mississippi Delta and Cotton Belt, with up to 4 million cases in 1974.  (Citations: 5, 6)

Is an Ascaris infection contagious?

Only the matured eggs of Ascaris are able to infect humans. Ingestion of soil that contains mature A. lumbricoides eggs will result in an Ascariasis infection.  This happens for example by consuming soil-contaminated vegetables or fruits that have not been carefully peeled, washed or cooked. It can also occur when hands or fingers that are covered with infected soil are put into the mouth.  (Citation: 7) Direct person-to-person infection by eggs transferring from one person to another, like in pinworm infections, is not possible with Ascariasis because the eggs must develop and mature outside of the human body first.

Adult Ascaris worms can survive in the human intestines for over 1-2 years. The female worms produce both unfertilized and fertilized eggs which are passed in the stool and excreted. Unfertilized eggs will not develop further and are sterile. Fertilized eggs undergo further development if they are deposited on soil that is moist and warm. Ascaris worm eggs can reach full development if human feces is utilized as a fertilizer or if people defecate out in the open on the soil. It takes several days for the eggs to complete their maturity and the eggs will become infective within a few weeks if no host is found.  After ingestion of the eggs by coming into contact with soil-contaminated hands or food, the eggs hatch and the larvae go into the intestinal mucosa. From here they enter the bloodstream, which carries them to the lungs. The larvae will further develop for 10-14 days in the lungs, after which they pass through the airways on their way to the throat. Once they reach the throat, they can be swallowed by the host, and they travel to the small intestine to become adult worms. In total the entire process takes 2-3 months for a viable egg to become an adult worm. Female adult worms in the small intestine can produce 200,000 eggs per day and continue the cycle. (Citations: 3, 4)

What are the signs and symptoms of an Ascaris infection?

Most Ascaris infections do not cause symptoms, especially if they are only mild infections. The signs and symptoms of heavier infections can be divided into two groups: the ones related to the lungs (where larvae live for some time during their maturation) and the ones related to the intestines.  (Citation: 8) The lung symptoms (Löffler syndrome, see under complications below) are mostly a persistent dry cough, sometimes accompanied by wheezing and shortness of breath. An X-ray of the lungs might show some fleeting infiltrates, while there might be increased eosinophils in the blood. Sometimes larvae are found in sputum. (Citations: 8, 11, 18) Intestinal symptoms can range from some abdominal discomfort or vague abdominal pain to very severe abdominal pain in the case of a bowel obstruction due to a mass of worms. Other intestinal symptoms can be nausea, vomiting, blood in the stools, diarrhea, fatigue, weight loss, malnutrition. Ascaris worms can also be seen in vomitus or stools, or even be seen coming from the nose, mouth or anus. (Citations: 8, 9, 11)

How to diagnose an Ascaris infection?

The primary method used to diagnosis Ascariasis is through microscopic examination of the stool in order to determine the presence of Ascaris eggs.  (Citation: 10) Ascariasis can also be diagnosed by finding adult worms in the stool or seeing them coming from the nose, mouth or anus. Because Ascaris larvae pass through the lungs during their development, they can sometimes be found in sputum.  (Citation: 11) It might also be possible to see larvae or the resulting infiltrates on a chest X-ray or a mass of worms on an X-ray of the abdomen. Worms that block ducts to organs like liver or pancreas might be seen on an Ultrasound, CT-scan or MRI.  (Citation: 12) 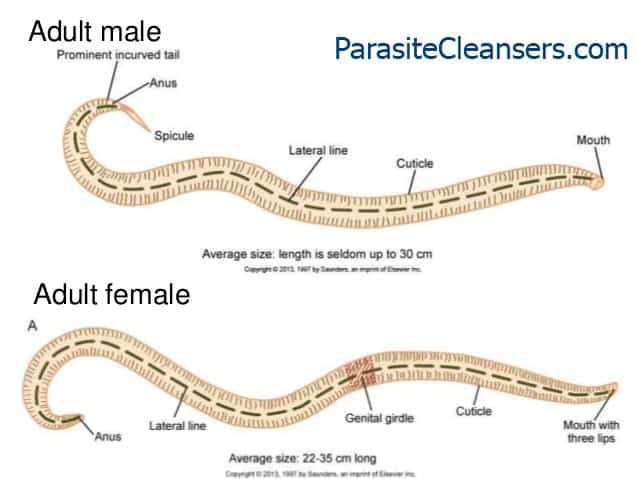 What is the treatment for an Ascaris infection?

What are complications from an Ascaris infection?

Complications are most likely to occur in a heavy infestation with Ascaris lumbricoides. It is thought that loss of appetite and poor absorption of, and competition for, nutrients can lead children to experience slowed growth. A mass of worms can block the intestines (bowel obstruction) leading to severe abdominal cramps, vomiting and sometimes even perforation and bleeding. Worms can also migrate into ducts that connect organs to the intestines, for example, the pancreatic duct, the duct to the liver and the gall duct.  (Citation: 14) Wani described gallbladder ascariasis in 28 patients presenting in most of them as cholecystitis and in a few of them as a biliary colic.  Klimovskij and colleagues recently described a pancreatic duct ascariasis, while Shiekh and others described the frequent occurrence of small bowel obstruction in Kashmir, often (63%) due to Ascaris.  (Citation: 17)

Another complication is the Löffler syndrome. (Citation: 11, 18) The Löffler syndrome is a response by the lungs and blood to the parasite infection. The symptoms are mostly dry cough, sudden changes in the chest X-ray and increase of eosinophils in the blood. This syndrome usually disappears within one month. Symptomatic treatment with corticosteroids might be used to aid in recovery. (Citation: 18)

What are preventive measures against Ascaris infection?

Preventive measures for Ascariasis are all aimed at preventing ingestion of infected eggs. The primary preventative measure is proper hygiene including handwashing and the adequate cooking, peeling and washing of fruits and vegetables that might be contaminated with soil that contains infectious eggs.

Handwashing with soap and water before preparing, handling and eating food is important to remove any soil that contains infective eggs, so they cannot be ingested when the hands or fingers are put into the mouth. Other measures are not defecating outside, and only in a latrine or toilet. Ensuring effective feces disposal systems with improved sanitation processes are used. This will reduce the contamination of the soil with infective eggs. (Citation: 19) Where hygiene is difficult to obtain, for example in developing countries, regular mass campaigns with Mebendazole or Albendazole (single dose) are implemented to control Ascariasis and other parasitic worm infections. The drugs used in the mass campaigns treat both symptomatic and asymptomatic worm infections but also reduce the adult female worm count so they cannot produce eggs anymore. (Citations: 11, 20, 21)