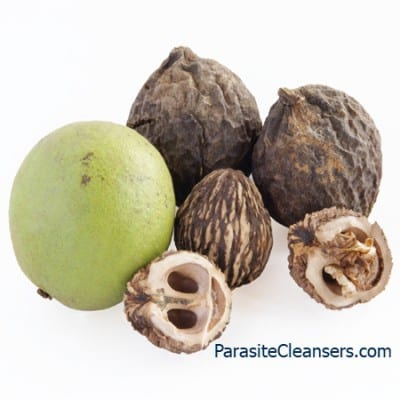 The black walnut is a less well known super food. We already know that walnuts provide benefits to aid in fighting depression, helps maintain and improve brain function, boosts heart health. But did you realize that Black Walnuts are also a very powerful anti-parasitic?

It’s called black walnut but we use the green part?

Black walnut (Juglans Nigra) is a highly prized medicinal herb. The origin of the word “nut” comes from ancient Latin “nux”. This Latin word refers to the inside of a shell. The formal botanical name, Juglans comes from Latin for “the acorn of Jupiter,” and Nigra comes from the Latin word for Black.

The green hulls and nuts of the black walnut, are well known to the herbalist community. Black walnut hull is very effective against fungal infections, and the juice extracted from the green hulls have a powerful effect against parasites.

The black walnut has been used for over 2000 years, by cultures all over the world, because they identified the strong ant parasitic effect this legume has. Modern studies have also identified its active components which have the additional benefits of neuroprotective, antioxidant, antineoplastic, antiatherogenic and anti-inflammatory effects.

Some think the origin of the walnut is Persia or into Asia. Although no definitive evidence exists to know precisely where the walnut originates. Native Americans would consume black walnuts as a medicinal herb long before any outsiders arrived. The great lakes region of North America there is ample archeological evidence of black walnut consumption dating back to 2000 BCE. In ancient Mesopotamia, at the famed Hanging Gardens of Babylon, it is written that you could also find walnut groves dating back to 2000 BCE.

In America during the early 1900s, doctors prescribed juglone for the treatment of various skin diseases (citation: 1). But the healthiest way to consume Juglone continues to be from the black walnut itself.

How does black Walnut help to kill parasites?

Even though black walnuts have been popular for over 2000 years, and used all over the world for that time to fight parasites in humans, modern science is just now realizing the full power of this nutritional supplement.

The reason why black walnuts are an essential part of so many herbal parasite cleanses is simple. It works effectively at expelling parasites. A key chemical compound in the black walnut hull is Juglone. Juglone, also called 5-hydroxy-1,4-naphthalene-dione, is an organic compound with the molecular formula C10H6O3. Juglone was not isolated from plants containing this compound until the 1850s. Other chemical compounds found in black walnuts include 1-alpha-tetralone derivative, (-)-regiolone, Stigmasterol, Beta-sitosterol, Taxifolin, Kaempferol, Quercetin and Myricetin. (Citation: 2)

Black Walnuts contain large amounts of beneficial antioxidants, monosaturated fatty acids and polyphenols. As well as folate, melatonin and phytosterols. These added components have been associated with beneficial effects for people suffering from various conditions like diabetes and cancer. Black walnuts not only help eliminate parasites in the human body, they also help maintain overall health.

Today juglone is also widely used as an organic garden insecticide. The antiparasitic effects of Juglone work against a wide variety of insects and parasites. But taken in small doses are not toxic to humans.

According to the Pharmaceutical Society of Australia, black walnut is effective against ringworm, tapeworm, pin or threadworm, and other parasites of the intestine. (Citation: 3)  This is why many effective parasite cleansers utilize this ingredient.