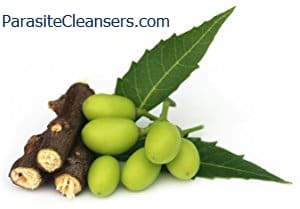 You have probably already heard of Neem. The neem tree is an incredible plant that has been declared the “Tree of the 21st century” by the United Nations. (Citation: 1)

It has been called everything from “the village pharmacy” to the “tree of a thousand and one uses”. Almost every part of the neem tree is used for herbal medicinal benefits. It is already highly regarded among naturopaths for its ability to prevent gum disease (gingivitis), boost the immune system, speed healing of wounds, birth control, treat intestinal irritations, help manage diabetes, prevent malaria and even fight cancer. But did you know that neem is also an important part of an effective parasite cleanse? It has renowned insecticidal, antiviral, bactericidal, antifeedant, antifungal, larvicidal, nematicidal effects against parasites in humans.

Neem (Azadirachta Indica) also goes by the common names Indian lilac, Nim and Margosa tree is a cousin of mahogany in the Meliaceae family. (citation: 2)

The tree is native to Indian sub-continent. (Citations: 3, 4)

Neem is a tall evergreen tree characterized by its bright green small leaves. When it is fully grown its height can reach up to 100 feet. In the springtime, it blossoms beautiful small white flowers. Its bark has hues of both gray and brown.

Neem oil has been approved by both the USDA and the EPA for insecticidal use. The EPA classifies neem as “practically non-toxic” requiring high doses to induce poison in experiments. If you are trying to become pregnant do not use neem! One of the effects of neem is to prevent pregnancy.

Siddha medicine is one of the oldest medical systems known to mankind. (Citation: 5)

So ancient that many believe that Siddha medicine predates all other medicinal systems in the world. In the ancient texts of the Siddha medicine system, the first medicinal plant described and written about is Neem. (citation: 6)

Neem oil which is made by extracting compounds from the neem tree has been used as an herbal medicine for over 4,000 years. The Sanskrit name of Neem is Arishtha, which means the “reliever of the sickness”. (Citation: 7) Neem is also called Arista, a Sanskrit- a word that means “perfect, complete and imperishable”. The Sanskrit name “Nimba” comes from the term “ Syasthyamdadati” which translated means “to give good health”. Pinchumada, another of the many ancient names of Neem in Sanskrit means “the destroyer of leprosy and healer of skin infections”.

In the ancient documents “Carak-Samhita” and “Susruta-Samhita” there are entries detailing the medicinal properties of Neem. These books are the foundation of the Ayurvedic medicinal system.

Neem is widely mentioned in ancient Hindu mythology. It is said that Neem gained its healing properties from drops of heavenly nectar that fell on it from the sky.

There does not seem to be a single part of the Neem tree that has not been used for its medicinal properties. For thousands of years, Neem has been used by hundreds of millions of people and continues to benefit people all over the world today.

How does Neem kill parasites?

Virtually every part of the neem tree has medicinal properties. Although most of the commercially available neem oil comes from oil extracted from the seeds and powdered leaves.

Neem has a variety of chemical compounds which have been isolated and studied. While other herbal remedies may present with one or two substances that can fight parasites, the neem tree contains many.

Substantial evidence exists of neems ability to fight against bacterial infections. Many studies have been conducted and neem has been able to suppress many different types of bacteria.

Neem has been proven highly effective against a number of viruses. It is regularly used to treat different variations of the Pox virus. This includes and smallpox, as well as warts.

Neem has the ability to destroy a number of different Fungi that infect the human body including Candida. Even fungi that have not been affected by synthetic fungicides do not show resistance to neem oil. (Citation: 17)

Neem tea is a very popular herbal medicine to combat intestinal worms. Not only does the neem oil kill parasites in the intestinal system, it has properties to help the body remove toxins that are released.

Neem oil applied to the skin has shown the ability to kill both scabies and lice. Azadirachtin appears to act as an “ecdysone blocker” against insects. This leaves them without the ability to reproduce. The insects become unable to produce and release a series of hormones which help them find each other. For many insects, Azadirachtin also prevents their ability to feed. If they do not die of starvation and do feed, even a small amount will kill them. (Citation: 18)