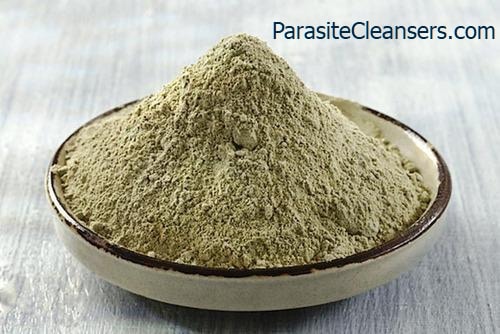 You might have already heard of Bentonite clay. It is well known for its ability to remove toxins, heavy metals and other impurities and chemicals from the human body and is widely used in mud clay masks. Sometimes sprinkled in baths to help treat the skin and heal eczema, dermatitis & psoriasis.

This natural remedy is called upon to treat conditions ranging from rashes, skin and mouth infections to poisoning and dysentery all thanks to its incredible detox and cleansing abilities.

It also it contains an abundance of minerals including calcium, iron, potassium, sodium, magnesium and silica which makes it an excellent dietary supplement. But did you know that Bentonite clay is also an effective remedy to help kill parasites?

Use the power of volcanoes to fight against parasites

The term bentonite is defined as “ any natural material composed dominantly of the clay minerals of the smectite group and whose properties are controlled by these clay minerals.” These clay deposits are from aged volcanic ash. The term Bentonite clay was introduced by Wilbur C. Knight in 1898 and refers to the Benton Shale the formation in which the clay was thought to occur at that time. (Citation: 1) Bentonite clay is also commonly called Montmorillonite clay in reference to a large deposit found in Europe.

Even though the use of Bentonite clay as a parasite cleanse is unknown to many people, it has been used by many cultures throughout history as both a nutritional aid and an excellent way to detox the body.

The earliest evidence we have of our ancestors eating clay comes from a prehistoric site located at Kalambo Falls. Where a calcium-rich white clay was found alongside the bones of Homo habilis (the immediate predecessor of Homo sapiens). (Citations:2, 3)

There are indications that homo-erectus and homo-neanderthalensis used ochres mixed with water and different types of mud to cure wounds, to soothe irritations and as a method of skin cleaning (Citation: 4)

Bentonite clay is a naturally occurring substance that has been used since the time of the ancient Greeks as a treatment for a number of both internal and external medical conditions. Aristotle (384–322 BC) made Historical records of people who ate clay in Europe in which he described its use for both therapeutic and religious purposes.

We have evidence that for at least the past several hundred years several native cultures including those in the Andes, Central Africa and Australia would consume clays for a variety of reasons. Including carrying balls of dried clay with them regularly and dissolving a small amount in water to drink with meals as a way to prevent poisoning from any toxins present, in their food. (Citation: 5)

In short, we have been consuming clay all throughout human history and have recently stopped the practice and forgotten the potential health benefits of doing so.

How does bentonite clay fight against parasites?

Due to its chemical composition, when Bentonite clay comes into contact with liquid and becomes hydrated, it creates a strong negative ion charge. Negative ion and positive ion charges are attracted to each other. Positively charged substances like heavy metals, toxins, free radicals, bacteria are drawn to it. (citation: 6) As well as intestinal worms like hookworms, tapeworms, flukes and pinworms. Once these substances which are positively charged come into contact with Bentonite clay, which is negatively charged, they become bound together. Once bound, your body is able to safely expel the unwanted parasites from the human body. Due to its highly porous nature, it is able to attract a lot of unwanted substances which can get trapped inside of its structure.

As the Bentonite clay absorbs the unwanted parasites, it will release beneficial minerals into the body. It also has an alkalizing effect on the body. This alkalizing effect helps to restore the healthy balance of helpful bacteria in your gut which joins in the fight against unwanted parasites. (citation:7,8). Studies continue to document the ability of clay to destroy a wide range of bacteria including MRSA, Salmonella and E. Coli. (Citation: 9) This research into the ability of clay provides substantial evidence of the potential ability of bentonite to combat even antibiotic-resistant bacteria that are becoming more common.

In the book, The Clay Cure, by Ran Knishinsky he writes: “While many herbs and homeopathic remedies are suggested for this condition, I believe clay offers one of the finest treatments for all types of parasites.  First, its use will stimulate the gallbladder to increase the flow of bile according to Raymond Dextreit, a French naturopath. According to Ran Knishinsky, no parasite can live too long under any bilious condition.

According to some people, heavy metals in your system and resistant parasites are found together. Heavy metals are able to accumulate inside of unwanted parasites which can be bad for your health. (Citation: 1) Highly damaging toxic metals like Mercury, Cadmium, Lead and Benzene can become trapped inside of you. These heavy metals will build up over time and can actually benefit many of the parasites that you are trying to eliminate. Bentonite has proven effectiveness at eliminating these heavy metals that many parasites thrive on. (Citations: 11, 12)

How Do You Do a Bentonite clay parasite cleanse?

If you are planning on consuming Bentonite clay as part of your parasite cleanse, it is recommended that you also take psyllium husk. This is to prevent constipation as the fiber material helps prevent the clay from clumping up and clogging your digestive tract due to constipation.