What is a Filarial infection?

Filarial infection or Filariasis is caused by parasitic roundworms of the Filarioidea superfamily. There are many filarial parasites, but only 8 of them commonly infect humans. We discuss the four most common filarial infections in humans in more detail. (Citation: 1) They can be divided into three groups depending on the main body areas or organs they infect: cutaneous, lymphatic and body-cavity.  (Citation: 2)

Some of the other filariae species can cause incomplete infections in humans, for example, the dog heartworm Dirofilaria immitis. (Citation: 2)

How common is a Filarial infection?

Lymphatic filariasis (Elephantiasis) is a neglected tropical disease and has infected over 120 million people in 73 countries, of which about 40 million with remaining disfigurement and incapacitation. Lymphatic filariasis is seen in the (sub-)tropics, with only four countries endemic in the Americas: Haiti, Dominican Republic, Brazil and Guyana. The disease disappeared around 1930 from the United States, with as last known location Charleston (South Carolina).  (Citations: 6, 7)

Mansonella perstans is found in parts of Sub-Sahara Africa and South and Central America.  Mansonella streptocerca is primarily found in the countries on the coast of West Africa, while Mansonella ozzardi is only found in the New World in a patchy distribution from South Mexico up to Bolivia.  (Citations: 8, 9, 10)

Loa loa (African eye worm) is most commonly found in West and Central Africa, in 2010 WHO developed a map showing the estimated prevalence of eye worm history in the affected 11 countries.  (Citations: 11, 12) 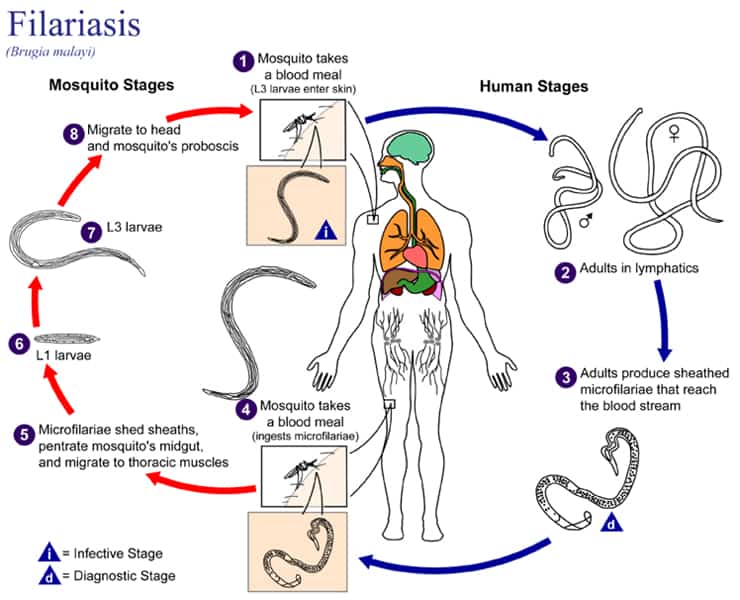 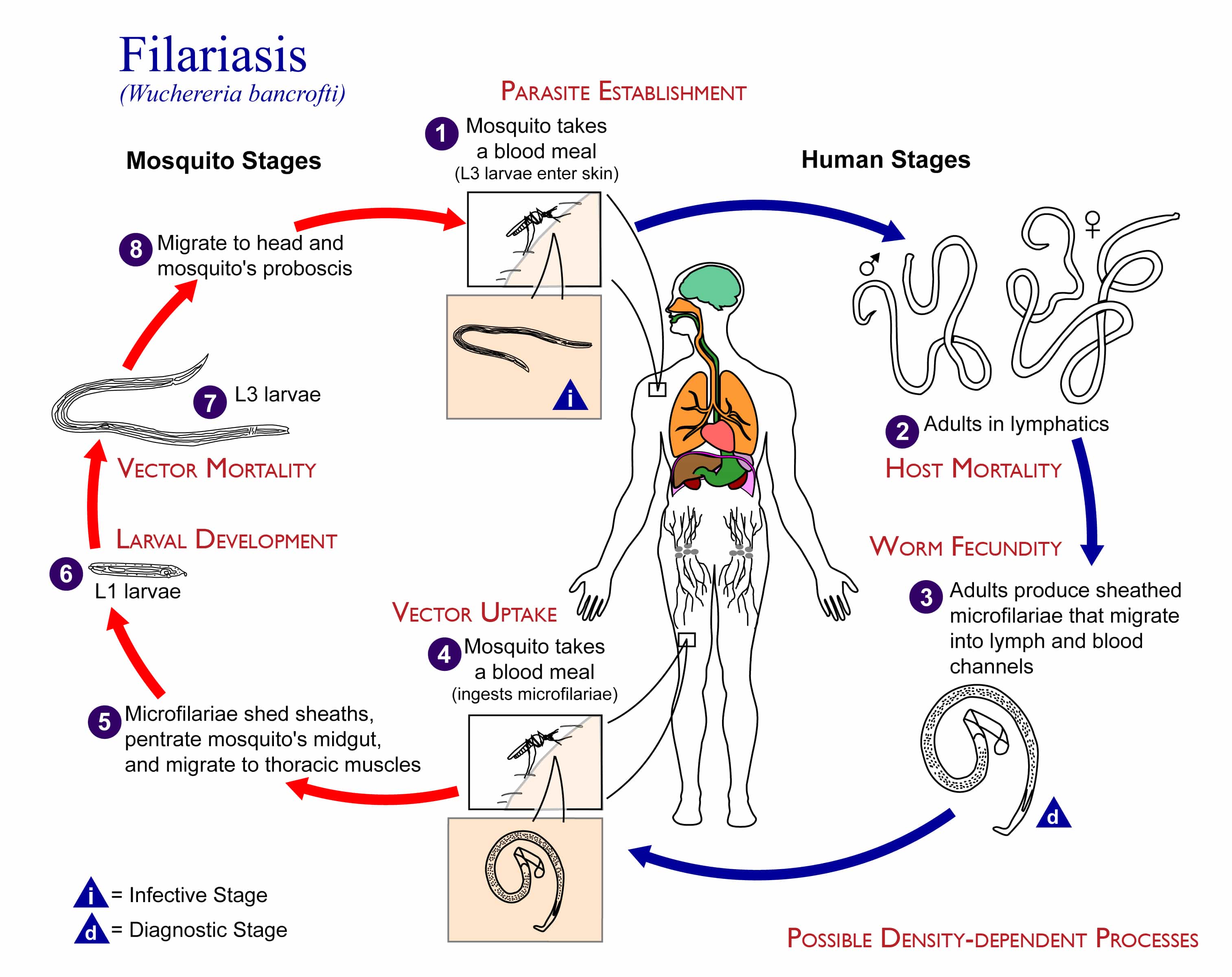 Onchocerciasis (River blindness) occurs in tropical areas, with more than 99% of the infected 25 million people living in 31 Sub-Saharan African countries. Outside Africa onchocerciasis occurs in Yemen and in the Americas, where the transmission is ongoing in only two countries: Brazil and Venezuela. Guatemala (2016), Colombia (2013), Ecuador (2014) and Mexico (2015) were recently declared free of onchocerciasis after decade-long elimination campaigns.  (Citations: 13, 14)

Is a Filarial infection contagious?

Lymphatic filariasis (Elephantiasis) is transmitted through bites of mosquitoes that carry infective larvae of W. bancrofti, B. malayi or B. timori. The mosquitoes deposit the larvae of these worms into the skin during a blood meal. The larvae move from the skin surface to the lymphatic system where they develop into adult worms. The male worm will reach an average length of 4 centimeters long, and the female worm will reach lengths of 8-10 centimeters long. The adults survive several years in the lymphatic system and produce millions of microfilariae (immature larvae) that move about in the lymphatic system and the bloodstream. These microfilariae will then infect mosquitos that take a blood meal from an infected individual. Once inside the mosquito, the microfilariae develop into infective larvae, completing the life cycle.  (Citations: 15, 16) 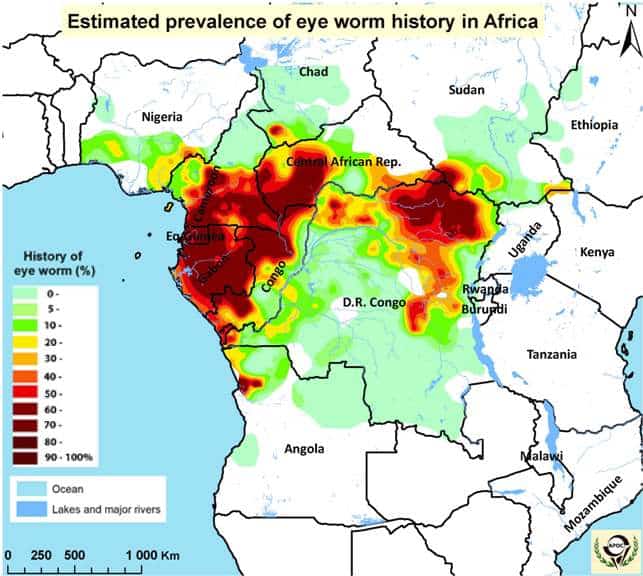 The CDC has developed graphic displays of the prevalence of W. bancrofti and B. malayi.  (Citations: 17, 18)

Mansonellosis is transmitted to humans by arthropods (black fly Simulium for M. ozzardi, midge Culicoides for all 3 Mansonella’s. They put microfilariae into the bite wound during a blood meal. From there they develop into adult worms that reside in the subcutaneous tissue (M. ozzardi), body cavities (M. perstans) or the dermis (lower layer of the skin, M. streptocerca). The adult worms produce microfilariae that mostly stay in the skin (M. streptocerca) and can even move into the bloodstream (all Mansonella’s). Microfilariae in the blood are transferred to a midge or blackfly during another blood meal, where they develop into infective larvae. More details on the respective life cycles can be found on the CDC website. (Citation: 25)

Loiasis (African eye worm) larvae are transmitted through Chrysops or day-biting flies, often called deer fly or mango fly, during a blood meal. From there the larvae develop into adult worms of 3-7 centimeters long that can live in the subcutaneous tissue. Adult worms produce microfilariae that move into the body floods: blood, but also urine, sputum and spinal fluid. During a blood meal by flies, the flies can be infected, after which the microfilariae develop inside the flies into infected larvae.  (Citation: 19)

Onchocerciasis (River blindness) is transmitted through Simulium blackflies, who insert the O. volvulus larvae into the bite wound during a blood meal. From there the larvae develop into adult worms that live with sometimes many worms together in nodules in the subcutaneous tissue. These adult worms are 33-50 centimeters (female) and 19-42 millimeters (male) and can live up to 15 years. The female adult produces microfilariae that usually live in the skin, but are occasionally found in blood, urine or sputum. The microfilariae in the blood can infect a biting blackfly, inside which the microfilariae develop into infective larvae. Adult female worms can produce microfilariae up to 9 years.  (Citation: 20)

What are the signs and symptoms of Filarial infection?

Lymphatic filariasis (Elephantiasis) infection is asymptomatic in the majority of people, in some people there are acute signs and symptoms. The chronic form of lymphatic filariasis is discussed under complications (see below). The acute forms are acute adenolymphangitis (ADL, inflammation of both the glands and the lymph vessels), filarial fever (fever with inflammation of lymph glands) and tropical pulmonary eosinophilia (TPE).  TPE is uncommon and believed to be due hypersensitivity to the microfilariae resulting in bronchospasm, lung infiltrates, fever and a high level of eosinophils in the blood.  (Citations: 16, 21, 22, 23) 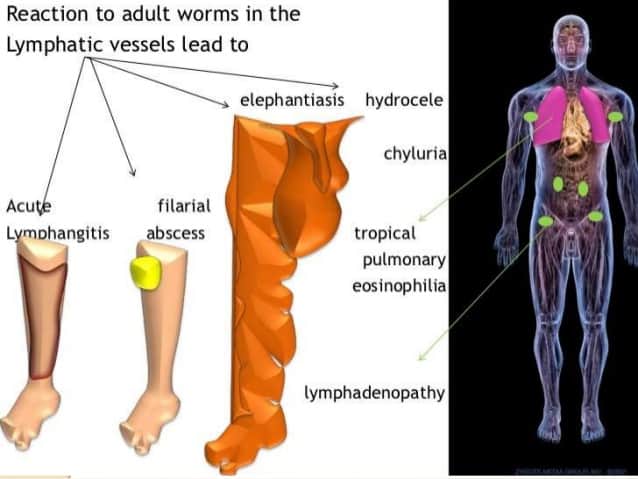 Loiasis (African eye worm) is mostly asymptomatic; symptoms are more common in travelers from non-endemic areas. Calabar swellings (angioedema that lasts for a few days often with itching) and eye worm (adult worm passing through the eye) are the most common symptoms. Sometimes there is itching without Calabar swellings. Usually there is eosinophilia present as well. (Citations: 32, 25)

How is the diagnosis of Filarial infection in humans made?

The common diagnostic method for lymphatic filariasis (Elephantiasis) is a microscopic examination of a blood smear for microfilariae, of blood collected between 10 pm and 2 am (when the microfilariae are released into the blood – nocturnal periodicity). Other options are tests looking for parasite antigen/ antibodies or parasite molecules.16,  (Citations: 16, 26)

Mansonellosis can be diagnosed through microscopic examination of either a thick blood smear (looking for microfilariae of Mansonella perstans and Mansonella ozzardi, no nocturnal periodicity) or of multiple skin snips (Mansonella streptocerca). Other options are antibody tests or PCR tests (for DNA). (Citations: 40, 27)

Loiasis (African eye worm) is diagnosed through identification of adult worms (moving in the eye, removed from skin or eye) or seeing microfilariae in a blood smear taken between 10 pm and 2 am. Another possibility is an antibody test against Loa loa. (Citations: 32, 28)

The usual way to diagnose onchocerciasis (River blindness) is with multiple skin-snips (using microscopy on microfilariae and/or a PCR test) and a slit-lamp examination of the front part of the eye (also looking for microfilariae). (Citations: 38, 29)

What is the treatment for a Filarial infection?

Treatment for the acute stages of Lymphatic filariasis (Elephantiasis) is with DEC (Diethylcarbamazine) (1- or 12-days regimens), which in the USA is available from CDC. DEC should not be used in patients who also have onchocerciasis and/or loiasis, as this may result respectively in worsening of eye problems and severe reactions including death and encephalopathy. Other treatment options are Ivermectin + Albendazole and long-term Doxycycline. Treatment for chronic stages is symptomatic and includes wound treatment as well as surgery in advanced cases. (Citations: 30, 16)

Symptomatic Loiasis (African eye worm) that is not heavy (less than 8,000 microfilariae per ml blood) is treated with DEC (21 days with increasing dose). Heavy Loiasis is first treated with Albendazole (21 days) to reduce the microfilarial load to less than 8,000/ml blood, after which treatment with DEC follows.  This is done to prevent encephalopathy, coma and death. (Citations: 32, 33)

Treatment of onchocerciasis (River blindness) is with Ivermectin in a single dose, repeated every 6 to 12 months. Infection with Loa loa should be excluded as Ivermectin cause serious effects in Loiasis. A new treatment for Onchocerciasis is with Doxycycline therapy. Also, studies are currently underway to determine the effectiveness of moxidectin against River blindness. (Citations: 38, 34)

Are there complications of Filarial infection in humans?

Lymphatic filariasis (Elephantiasis) complications are bacterial co-infections of the acute (skin / lymphatic system) manifestations and the development of the chronic manifestations. These include chronic lymphedema (tissue swelling) of the skin and tissue thickening of the limbs and/or genitals (scrotum, vulva, breasts) and scrotal swelling (hydrocele). (Citations: 6, 35)

Usually, Mansonellosis is mild and does not give complications. Complications are usually related to skin, lymphatic system and joints. (Citations: 40,41)

Complications of onchocerciasis (River blindness) are mainly on the skin and eyes. For the eyes, this can range from mild visual problems to blindness; local people call onchocerciasis “river blindness”. For the skin, this can be atrophy, hypopigmentation (“leopard skin”), thinning of the skin (“cigarette-paper skin” and “hanging groin”) and a reactive onchodermatitis often on one limb (“Sowda”). (Citations: 37, 38, 39)

What are the preventive measure for a Filarial infection?

There are no vaccines available to prevent lymphatic filariasis, mansonellosis, loiasis and onchocerciasis.

Mansonellosis is prevented through prevention of bites by the black fly (M. ozzardi) and the Culicoides midge (all three Mansonella types). Bed nets are unfortunately not useful for bite prevention because the flies and midges are so small that they can pass through the nets. The only bite prevention is, therefore, avoidance of the areas they are found and application of insecticide (e.g. DEET) to exposed skin and clothes (e.g. permethrin-treatment) and wearing clothing with long sleeves and pants. (Citations: 40,41)

Loiasis (African eye worm) can be prevented through avoiding the areas where the deerflies are found (muddy, shaded areas along rivers and areas around wood fires) and bite prevention (DEET repellant on exposed skin, long sleeve shirts and pants during the day as well as permethrin-treated clothing). It should be noted that deerflies bite during the day. Another option is chemoprophylaxis with DEC (Diethylcarbamazine) once a week. (Citation: 42)

Prevention of onchocerciasis (River blindness) is only possible through prevention of the blackflies bites (explained above). It should be noted that blackflies and midges (also) bite during the day.  (Citation: 43)