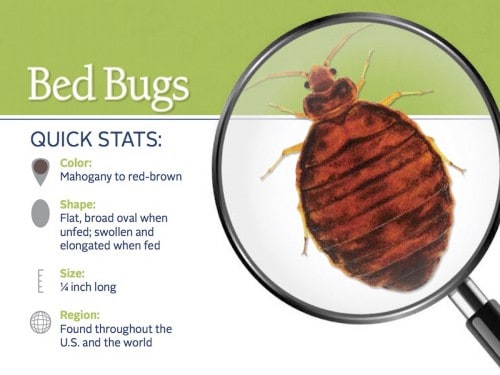 What is a Bed bugs infestation?

Bed bugs are small (1-7 mm), reddish-brown parasitic insects of the Cimicid family that can only survive by consuming blood. The two types of bed bugs that commonly are found to feed on humans are Cimex lectularis (common bed bug) and Cimex hemipterus. The common bed bug Cimex lectularis is seen more in temperate climates, while Cimex hemipterus is seen more in tropical climates. (Citation: 10) Occasionally humans get infested with Cimex that usually lives on birds and bats. (Citations: 1, 2) Bed bugs are so far not known to spread other diseases to human beings. (Citations: 1, 4)

How common are Bed bugs infestations?

Historically, bed bugs were thought to be restricted to the developing world and unhygienic conditions. However, in recent decades bed bugs have seen a resurgence in the developed world with no relation to hygiene. Bed bugs have even been found in five-star hotels. (Citations: 1, 3, 13) Bed bugs live in and around the areas where people sleep in, including the beds, mattresses, cushions and walls. Be bugs attracted by the warmth and by the carbon dioxide that people emit. They are also found in mud walls and thatched roofs in developing countries. (Citations: 1, 10) Bed bugs are not only good at hiding but are also good at traveling. Bed bugs can travel not only within the building they live going room to room, or from floor to floor, but also stowed-away in luggage or suitcases inside of folded clothes and furniture or beddings. (Citations: 1, 7, 4)

Bed bug bites on humans typically happen when a person is located in sleeping areas that are infested with bed bugs. Bed bugs are, so far are not considered a high risk for spreading the disease to humans. (Citation: 1) A recent review article confirmed that although up to 45 disease pathogens have been found in bed bugs, therefore, the potential exists for those pathogens to be transmitted to humans, although, there is limited peer-reviewed evidence so far that bed bugs actually transmit all those pathogens to humans. The article authors hypothesize that bed bugs may have “neutralizing factors” that reduce their ability as a disease transmission agent. (Citation: 5) Studies are still being done to determine if some bacteria or viruses can be transmitted to humans due to the potential for transmission. A recent study showed that it is possible for Bed bugs to transmit the parasite that causes Chagas disease.  (Citation: 15) Some people hypothesize that Lyme disease, a widespread systemic infection caused by tick bites, is also spread by bed bugs although definitive studies have not shown with certainty.

What are signs and symptoms of Bed bugs bites?

Bed bug bites are usually found on skin that is exposed during sleep. This includes the face, neck, arms and hands. The bite marks are itchy and red, and often have a darker red spot in the middle. The bites frequently occur in lines along the limbs or in clusters/groups. (Citations: 6, 7, 10) The bed bug bite mark is usually a bit bigger and more swollen than other insect bites from fleas or mosquitoes. (Citation: 10) Development of bed bug bite marks can take up to 10 to 14 days from time bitten to completely healed. (Citations: 1, 10)

Some people develop an allergic reaction to the bites and may have welts of up to 5 centimeters around bite sites which can occasionally also develop into blisters (bullae). (Citation: 6) 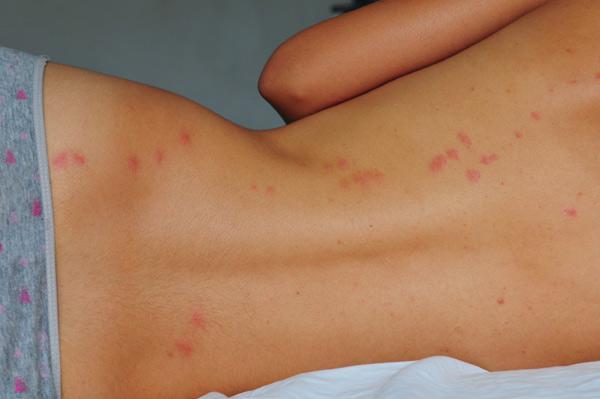 How to diagnose Bed bugs bites?

The diagnosis of bed bug bites is usually made by the appearance of the distinctive bite mark. Bite marks in combination with the sighting of the actual bed bug in or around the sleeping area is the preferred method of diagnosis. (Citation: 10)

Bed bugs can be found alive, but they can also be detected by finding their exoskeletons that they leave behind after molting. They can also leave residual excretions and rusty-colored blood spots on sheets where they feed as well as permeate their smell which is sweet and musty. (Citation: 1) Another way to detect bed bugs is the sticky tape test. By putting double-sided sticky tape on all the bed legs and putting all the bed legs inside of sturdy glass jars. The bed should not be touching any other furniture or the wall, so the only way for bed bugs to travel on the bed itself is via the bed legs.  The tape will capture traveling bed bugs whether they are moving in or out of the bed.  (Citation: 8)

The treatment for bed bug bites is usually symptomatic with topical lotions or corticosteroids. Antihistamines are recommended to alleviate the extensive and severe itching associated with allergic reactions. Additionally, antibiotics for secondary bacterial infections may be needed to aid in recovery.  (Citation: 9, 10, 11)

Bed bugs themselves should be removed through a combination of physical and chemical means. Physical removal can be done by regularly vacuuming the surrounding areas. Also, regularly cleaning sheets and other suspect items in the laundry will eliminate bed bugs in those items. The laundry should be followed by drying at the highest possible temperature in a dryer. Another option is the application of temperatures below 0 degrees Celsius (32 degrees Fahrenheit), which can be obtained by placing the items inside of a freezer. There are professional extermination services that use portable devices to heat up entire rooms to over 50 degrees Celsius (122 degrees Fahrenheit) to kill all bed bug stages quickly at once. Chemicals are also used to kill bed bugs such as permethrin or neem oil. (Citations: 10, 11)

What are complications of Bed bug infestations?

Severe complications of bed bug infestations in humans are rare. The most common complication is a more intense reaction to the bite(s) with bigger bite marks and painful swelling, although anaphylaxis is rare. Other systemic reactions include asthma, angioedema and generalized urticaria. (Citation: 13) Bite sites can become infected with bacteria, especially if there are scratch wounds resulting from the intense itching. Other complications are sleeplessness and anxiety. (Citations: 1, 6) Multiple bed bug bites over a longer period of time might lead to iron-deficiency (anemia). (Citations: 12, 13, 6)

What are preventive measures against Bed bugs?

Prevention of both bed bug bites and bed bug infestations is difficult. Prevention of bed bug bites might be done by wearing clothing in bed (e.g. pajamas) and the use of bed nets treated with permethrin. A special bed bug spray can also be considered, noting that the typical mosquito and tick sprays often do not work against bed bugs.

Prevention of a bed bug infestation itself is a combination of monitoring for bed bug infestations and taking action if you find them. The first line of defense is preventing the beg bugs from entering your home by carefully inspecting second-hand beds, mattresses and upholstered furniture to avoid importing bed bugs from travel or holidays. Yes, bed bugs are even found in five-star hotels. Also, not having bird or bat nests that have bed bugs close to the house.  (Citation: 14)