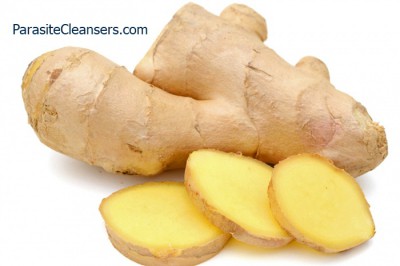 It is hard to pick up a recipe and not see ginger on the list. You can find the whole fresh root, crystallized ginger, honey-based ginger syrups, capsules containing powdered ginger extracts and alcohol extracts. The versatile ginger is used in almost anything you can imagine including tea, soup, stir fry, candies and even carbonated beverages. But ginger is not only a very tasty addition to your recipe list, it is also one of the healthiest ingredients in your kitchen.

Ginger is well known for its digestive benefits and has been widely used to quell upset stomach pains including nausea and vomiting. Ginger is also used in herbal medicine as a way to reduce inflammation. Also, many people will consume ginger as an effective aid in reducing menstrual cramp pain. Ginger is even reported to have substantial value as an aphrodisiac and even helps to prevent Cancer. But did you know that ginger is also an effective anti-parasitic?

From tangy treat to herbal remedy

Ginger (Zingiber officinale) is an herbaceous perennial which grows stems approximately one meter in height and gives yellow flowers. Ginger is in the family Zingiberaceae and is related to turmeric, cardamom, and Galangal. The part of the plant used is the Rhizome. Raw ginger is composed of 79% water, 18% carbohydrates, 2% protein, and 1% fat. It is botanically correct to refer to ginger as a rhizome rather than a root. The origin of the word “ginger” is traced back to old-English word from the mid 14th century “gingifer”.

The popularity of ginger as a spice and herbal medicine dates back thousands of years. It is native to the continent of Asia, with its widespread usage dating back over 4,000 years ago. Traditional Chinese, Ancient Greek and Ayurvedic Indian medicine saw ginger as a healing gift without rival. In the United States during the early twentieth century, it was regarded as the herb of choice for digestive support.

How Ginger helps to kill parasites

In a comparative study of the plant extracts (ginger, onion and garlic), and the extract was made from all three. A test was done to compare the capability of preventing fungal growth, and ginger was found to be the most effective of the three. (Citation: 4)

Aqueous extracts have also been shown to be effective against Trichomonas Vaginalis (Trichomoniasis). (Citation: 6)

Essential oils of ginger have been shown to have virucidal activity against aciclovir-sensitive and resistant strains of herpes simplex-1 reducing plaque formation significantly. (Citation: 7) There is also evidence that dose-dependent amounts of ginger can help fight against herpes simplex-2.

Ginger extract, several of its main constituents and essential oil of ginger exhibit antimicrobial activity in vitro and in vivo. Ginger extract has been shown to have an antibacterial effect against both Gram-positive and Gram-negative bacteria growth. (Citation: 8) The effects were so good that they are considered comparable to streptomycin and chloramphenicol.

In another recent study of freeze-dried ginger, it was shown to have an antibacterial effect (Citation: 9) further demonstrating the strong antibacterial properties of this herbal supplement