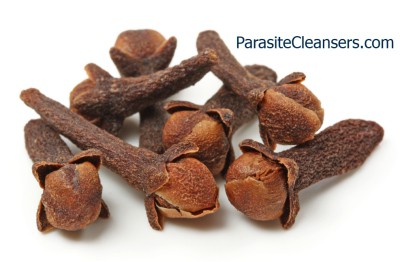 You have probably already heard of clove, and consume small amounts on a regular basis. Clove is one of the most well know spices on the planet and is widely used in wildly popular culinary recipes. Also, it is a main ingredient in many perfumes, soaps, toothpaste, mouthwash and chewing gum.

Cloves provide health benefits to people suffering from herpes to diabetes and even heart disease. Additionally, many say that clove has aphrodisiac properties.What you may not have known is that Cloves are a natural anthelmintic that can expel parasitic worms and other internal parasites from the body.

Cloves are used in medicine for its antibacterial, antiseptic and antibiotic properties. Studies have examined the way Cloves kills intestinal parasites and exhibits broad antimicrobial properties, thus supporting its traditional use as a treatment for intestinal worms and other parasites in humans. If you are thinking about doing a parasite cleanse, clove is a good ingredient to have in it.

Clove (Syzygium aromaticum – Eugenia aromaticum ) is a member of the Myrtaceae family. The part of the clove that is widely used is the unopened flower buds, which resemble small irregular nails. Clove is valued for its medicinal properties as a carminative and as a stimulant. Cloves help the muscles of the digestive tract to relax and keeps the digestive fluids flowing.

The use of clove as an herbal medicine dates back millennia in India. Ancient Ayurveda healers used cloves to treat a wide variety of ailments including respiratory and digestive dysfunction. In traditional Chinese medicine, it has been used to treat indigestion, diarrhea, ringworm and other fungal infections. The medieval German herbalists used cloves as part of an anti-gout mixture.

Cloves contain a variety of tannins, sterols, triterpenes and flavonoids. It is believed that the high level of eugenol present in the essential oil imparts strong biological and antimicrobial activity.

Cloves are commonly used in conjunction with other herbal medications, and not alone. Clove bud oil has various biological activities such as antibacterial, antifungal, antioxidant and insecticidal properties. The organs of the body which are most affected when consuming cloves are the kidney, spleen and stomach.

Cloves contain powerful antimicrobial agents that travel through the bloodstream, killing microscopic parasites and parasitic larvae and eggs. Cloves are tremendously effective in killing malaria, tuberculosis, cholera, scabies and other parasites, viruses, bacteria and fungi including Candida. Cloves are also good for a lot of parasite symptoms such as nausea, vomiting, gas, diarrhea, dizziness, and low blood pressure. This makes clove an important ingredient in a parasite cleanse.

Clove oil has been demonstrated to inhibit yeast and fungi growth in vitro,  including against fluconazole-resistant strains of Candida spp. and Aspergillus spp. (Citation: 1, 2, 3)

In other words, Clove kills the fungi and inhibits further growth of Candida albicans. This is why anyone who has suffered from Candida overgrowth may have been told to use this supplement. Taking clove orally can help to reduce candida in the digestive tract as well.

Studies have demonstrated the ability of cloves to disrupt enzyme function of Hepatitis C virus and well as the capability to fight against the herpes simplex virus. (Citations: 5, 6)

Eugenol found in clove oil has demonstrated significant potential for clinical trials to help fight against permethrin-resistant scabies mites (Sarcoptes scabiei). In vitro studies have shown eugenol and clove oil to be toxic to scabies. The levels demonstrated suggest that it is even more toxic than benzyl benzoate (a widely used topical acaricide for treating scabies).

Clove essential oil and the eugenol found in it has been shown to have toxic effects against a wide variety of protozoa. Making the protozoa unable to replicate and sustain themselves, thus eliminating them. (citation: 7)