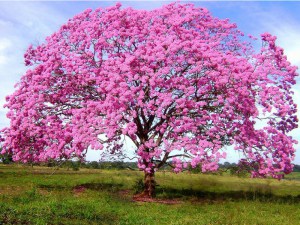 Many herbal medicines have come out of the rainforest in recent years and Pau D’arco is proving to be one of the most important. Long used as a traditional herb, Pau D’arco is now coming of age globally.

Pau D’Arco Sometimes called the ‘divine tree” by Brazilians, is used as an herbal remedy to treat a range of conditions including pain, arthritis, prostatitis, psoriasis, fever, dysentery and even cancer and Lupus. Modern researchers have also taken notice of its effective uses against parasites in humans thanks to its antimicrobial and antifungal properties.

From the heart of the Amazon, a new medicine is born

Pau D’Arco (Tabebuia avellanedae), is a broadleaf evergreen that grows to a height of 125 feet and has pink-to-violet colored flowers. It is a tree that is native to the regions of modern-day Argentina, Peru, Bolivia, Paraguay and Brazil.

The Guarani and Tupi Indians call the tree tajy, which means “to have strength and vigor.”. The use of Pau d’arco by the indigenous peoples of South America dates back hundreds of years and is even thought that its use predates the Inca civilization. It is noteworthy that indigenous tribes separated by hundreds of miles used the bark of this tree to treat the same conditions. Modern medicinal use of the bark of the tree dates back to the late 1800’s when doctors would prescribe it for a variety of ailments. The wood from this tree is very strong and has also been used to create bows and arrows. It is also popular in construction as it can hold a large amount of weight and is very resistant to fire.

The first widespread use of Pau D’Arco occurred in South America during the 1960’s. Media reports began to surface about the medicinal potential of tree bark when brewed into a tea. At the Municipal Hospital of Santo Andre’ doctors would brew a tea made from of the bark of the tree on terminal cancer patients.  The Doctors then reported that most patients with tumors can pain from cancer were healed within thirty days of treatment. Since then it has remained a staple of the medicine cabinets of people all over South America.

Pau d’arco finally achieved mainstream status in the United States in 1981.All thanks to a newspaper article based on the original article written in O’Cruzeiro in the 1960s.

Lapachol and beta-lapachone (collectively known as naphthoquinones) are the two main parasite fighting chemicals found in Pau D’arco. In lab tests, these chemicals have shown the ability to kill bacteria, fungi, viruses, and other parasites in humans parasites.(Citation: 1,6)

Lapachol was first isolated by E. Paterno from Tabebuia avellanedae in 1882.  (Citation:2). Beta-lapachone was discovered after it was derived from the wood of pau d’arco in northern Brazil. Since the discovery of its chemical composition, numerous studies have been conducted in North America and Europe to determine its medicinal benefits.

According to the laboratory tests, both have antifungal properties as potent or more so than ketoconazole, a common antifungal drug. Pau d’arco is applied directly to the skin for Candida yeast infections. (Citation: 3)

“it was reported that lapachol has a significant effect against Candida albicans, Candida tropicalis, and Cryptococcus neoformans, that was similar to Amphotericin B. The presumed antifungal activity of lapachol is believed to be due to its interaction with the cellular membrane.” (Citation: 4)

Studies have shown that Pau D’arco has exhibited strong in vitro activity against various gram-positive and gram-negative bacteria. This makes it a possible aid in clearing up Bacterial infections such as brucellosis, urinary tract infections, GI problems and dermatitis. (Citations: 5, 6, 7, 8, 9)

Pau d’arco may be used to treat a wide range of infections including viral respiratory infections such as the common cold, flu, and H1N1 (swine) flu; sexually transmitted infections such as gonorrhea and syphilis; infections of the prostate and bladder
Thanks to its in-vitro antiviral properties of its Naphthoquinone Lapachol, Pau D’arco has been studied for its effectiveness against several viral strains including herpes 1 and 2, as well as influenza, poliovirus, and vesicular stomatitis virus.

It is thought that the chemicals of the plant can interfere with the reproduction capability of the viruses, therefore, causing them to die off. It is reported that lapachol decreases the replication of viruses in humans, however, there is no available clinical data. (Citation: 10)

Lapachol has been used as a topical barrier prevent infection from trematodes, specifically Schistosoma. which causes schistosomiasis.

Additionally, lapachol is said to have possible effects against Trypanosoma cruzi. This is the infection which causes trypanosomiasis or Chagas disease. However definitive studies were not found.

Antiplatelet and anticoagulant drugs (blood thinners) — Pau d’arco may affect the blood’s ability to clot and could interfere with blood-thinning drugs, including Warfarin, Clopidogrel and Aspirin.